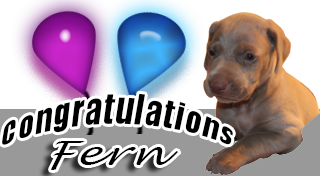 
Today is the final day of the pups diary for this year, but dont worry as this diary ends "A Weimaraner's Diary" starts tomorrow.
Todays photo is of Scott picking up Enjager Explorer to take him to his new home on Rannock Moor in the Scottish Highlands, we are really looking forward to seeing photos of Explorer hunting and playing, please follow the link to Scott & Stephs Hotel on Rannock Moor a dog friendly hotel in the picturesque Highlands a perfect place to get away from the rat race no internet, mobile or tv just breath taking scenery and wildlife and of course you will be greeted by Enjager Explorer.


Enjager Wizard of the Wood (Merlin) went to his new home yesterday, many thanks to Sean for letting us know he travelled well (fell a sleep), we look forward to seeing photos of him settling in to his new home.


On Thursday Kathryn and James took Henry home, he has settled well into family life and has three new play friends.


Ella went to her new home on Wednesday, here she is with her new family Diane and Alan.
Freddy and Ella's new families have let us know how they are settling in as the first night can be difficult for the pups.
Freddy travelled home without incident and has settled in to his new home and made friends instantly with his new toy dog, photo to follow. Ella did'nt travel as well and was sick twice, but has now settled down and had a good nights sleep and eaten her breakfast.
The first night away from the litter is usually the difficult one, but all the pups who have left up to now including Henry who went to his new home yesterday, have had a good nights sleep and seem to have settled in quickly.


Both Freddy and Ella went to their new homes yesterday, todays photo is of Freddy and his new mum, his new mum emailed us last night to let us know he has settled well.


The pups are 8 weeks old today and Ella and Freddy (Siegfried Th Victor) are going to their new homes, theres a lot of mixed emotions, although we don't want to see them go, we know they are going to fantasic homes and they will come to see us and their mum again as they grow, we quite often get pups from previous litters calling to the farm and we really appreciate the owners taking the time to do so.


Ella been sweet and innocent, but don't worry she soon gets back to normal fighting with the boys.


Ella showing Merlin who the boss is.


This is a photo of Freddy relaxing in the sun on Thursday, without a care in the world.


Fern enjoying a few seconds of "me time", before Freddy and Henry come to investigate.


The pups 5 Generation Pedigree Certificates came on Monday, ready for the pups new families, unbelievably the pups are 8wks old next Wednesday and will start going to their new homes.


On Monday Wesley a pup from last years litter came to see his mum and new brothers and sister, its always great to see pups from previous litters, we love to see how they have matured and grown, and hear what they've been up to.


Fern, Bracken and pups, having a time out.


Thanks to Nigel and Ali for e-mailing this photo of Stanley with his little helpers.


Nigel and Ali brought up Stanley, one of last years pups to meet his brothers and sister.


While the other pups are playing Ella and Freddy sneak a quick drink of milk.


Last but definitely not least is Enjager Ella, don't be fooled by her dainty petite looks she's the boss, tha alfa female, mess with Ella at your peril good look Diane and Alan I hope Middlesbrough is ready for Ella.


Ferns playmate today is Enjager Siegfried the Victor to be known as Freddie, he will be joining Julia at his new home in Newcastle Upon Tyne.


The pup eating my wifes prized plant is Enjager Henry Eli at Trevine, his new parents are Kathryn and James and his new home is in Cleveland.


Todays pup is Enjager Explorer at Far Old, due to unforseen circumstances he became available yesterday, but will now have two new parents Steph and Scott, we are looking forward to seeing some fantastic photos of Explorer when he goes to his new home in the remote Scottish Highlands.


Starting today we will introduce each pup and their pedigree and home name, todays pup has quite an unusual name created by Marcus and Henry Richardson, Enjager Wizard of the Wood otherwise known as Merlin.

Secondly I have uploaded two new pages to the website where you can see more photos of Merlin and the gang, New Born 2013 and A pups Life 2013, both are found on the Litters Tab.


Todays picture is of Enjager Henry Eli at Trevine or just Henry.


One of the pups, just before he tries to have a drink, but Fern's not having any of it.


Fern having a time out with Freddie one of her pups.


Life for the pups consists of a long nap, eat as much they can, then a quick play fight to burn some energy off.


The pups are 5wks old today, and their into everything exploring different shapes and noises, anything that looks interesting.


I took this photo a couple of days ago, the expression of the pup underneath is priceless.


When the weathers nice, the pups love to play out on the lawn, but playing is thirsty work as Fern finds out.


The fith pup profile is Red, he's one of the bigger boys, but once again at this age size is irrelevant they have growth spirits, like Blue he loves his food, and once he's had a nap, watch out pups its play time.


The fourth pup profile is Black Chequer, he's not as big as some of the other boys, but at this age, size is irrelevant they have growth spirits, one minute one will be bigger than another and visa versa, he's well proportioned and a lovely temperament, always there for a cuddle.


The third pup profile is Light Blue, he's not as active, but every now and then he has a spirt of energy and is in the middle of it all, he's a good looking boy.


The second pup profile is Blue, he likes his food a little play and a long sleep, but he's a growing boy with a lovely expression.


The first pup profile is Ella, obviously these are initial observations, but be warned Ella although small is showing signs of been the pack leader, I hope you are prepared Diane and Allan.


We put coloured collars on the pups yesterday, pink for Ella and light blue, blue, chequred black and red for the boys.


Now the pups have tried solids, there is less of a burden on Fern to feed them, she can start to relax and enjoy them more.


The pups tried solids for the first time yesterday, and they loved them.


Enjager-weimaraner has joined Face Book, take a look at our page.

This is a photo of the pups all together, just before their move in to their larger accomodation.


Today is the day the pups move in to their larger accomodation, we cant keep them in the whelping box now they've learnt how to scale the sides, take a look at the photo.


When we change the puppies bed every day they get to explore the outside of their whelping box and they love to investigate all the different things.


The little pup in this photo had his brothers and sister on top of him, and he is happy.


PLEASE note that the video to the right won't play on older versions of IE, but will play on most mobile phones and tablets etc.
The pups are all walking now, it won't be long befor they move in to the large pen to give them more room to play.


Fern oversees, while her two daughters fuss the pups.


As soon as the pups are wormed, theres nothing better than a drink of milk to take the taste away.


One of Ferns Pups, just after he's been wormed, not looking very happy.


At two weeks old we worm the puppies for the first time on a three day course of panacur, surprisingly puppies can be infected with worms by their mother while still in the womb, this is why it is important to have a worming plan in place for both the mother and pups.
But before we worm the pups we have to weigh them, which is no mean feat , this year the pups are 1.5Kg at two weeks old, which is exceptional.


Puppy Love, Ella on top and one of her brothers below, enjoying a nap.


Yesterday I extended the sides of the whelping box, there are'nt any weimaraner pups escaping out of there.


We bought the little coloured collars for the pups yesterday, ready for when they move home into the larger whelping area. The collars will help us to be able to distinguish the different characters of the pups.


The pups eyes started to open yesterday, the'll be up to mischief now.


Has any one seen our escaped weimaraner pup, only joking, Ferns newest daughter Ella escaped yesterday but only for a few minutes, she's safely back with her brothers now.


Fern is a fantastic mum, and always makes sure her pups are well fed and clean, but every morning we clean the inside of the whelping box and change their vet bed for a freshly washed one, this means moving all the pups and Fern as shown, no mean task.


A proud Fern looking over her pups.


I could'nt resist taking this bit of video of the pups drinking, boy are they demanding.


Fern introduces her daughters, Bracken & Saphy to her new litter.


The pups are only a few days old, but their stripes have started to fade and they have practically doubled in size .


At an early stage the Fern and her pups are checked by our vet for anything that could affect their health.


Our 5 beautiful little weimaraner pups over night have changed in to milk monsters, and are increasing in size daily.


Their only 1 day old, but the pups are already growing and changing quickly, and Ferns blooming.


Fern started whelping on Monday night and had her first pup 7:10pm Tuesday night, currently at 1am on Wednesday morning she's had 3 pups but we are expecting more.

Fern gave birth to her last pup at 4:20am last night she eventually gave birth to 5 beautiful weimaraner pups, 1 girl and 4 boys, please see photos opposite.