We are pleased to announce that on the 13th & 15th January 2014 we took our stunning Weimaraner Enjager Sapphire or as we call her Saphy to meet Gunalt Overhear, or as he is affectionately known HERO.

Hero is only 20 months old but is already showing great promise in the show ring and is tipped to be the one to watch in the future, he has a fantastic parentage which includes his father Gunalt Distinction for Brownbank and his Grand Father Gunalt Unstoppable from Mianja, who in his day was voted best sire all breeds.

Sapphire's father is Gunalt De Ice at Stridview the current top Weimaraner in the UK.

After meeting Hero, we stopped off at Skipton where Saphy met her first swan and enjoyed a walk along the canal.


Its 17th February 2015, just over a month since Sapphire met Hero and she's now half way through her pregnancy. She's just starting to showing slight signs of been pregnant. She's been a little bit picky with her food and had a few sickie mornings, but physically there aren't many tell tale signs, at all.

17th February 2015 and todays the day Sapphire has her pregnancy scan, finally we will know for definite if she's pregnant or not, take a look at the video opposite.

There were a few moments of silence, while Chris the vet who scanned Sapphire moved the scanner probe to locate the pups, then a breath of relieve when we saw the first pup.

The scan tells us there are a number of live puppies with heart beats, unfortunately it doesn't tell us how many there are.

Saphy trying to relax and watch some tv , but its difficult when you have a big puppy tummy.

Saphy try out her brand new whelping box and vet bed, nothing but the best.

In the later stages of Saphy's pregnancy she struggled to get comfortable, but she loved to lay her puppy tummy on the cool floor. 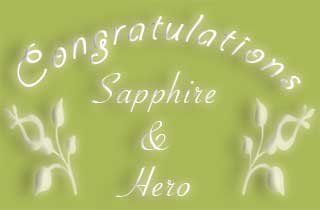 Saphy eventually gave birth to 1 boy and 5 Girls, mother and pups are all well.

After all the excitement, Saphy can finally settle down and relax with her new little Weimaraner puppies.

We weigh the pups regularly to make sure they are gaining weight, the poor little things must wonder whats happening.

We have to coax Sapphire to leave her pups and stretch her legs, she will only leave them for the shortest of walks.

Not a nice day for the Weimaraner puppies today, our vet came to remove their dew claws and what better way to ease the discomfort than a nice drink of milk.

Over the next 6 days we will introduce you to each of Saphy's Weimaraner puppies, we lightly mark one of their claws with different coloured nail varnish, as they get older we will cross reference this with their collars.

Todays Weimaraner puppy is, a little girl with black varnish on her claw.

The photo today is of another of Saphy's Weimaraner puppy daughters, this time marked with brown nail varnish.

Today is the turn of another of Sapphires daughter Weimaraner puppies this time marked with orange nail varnish.

The puppy Weimaraner's eyes started to open yesterday, it won't be long now before they are learning to walk.

Todays photo is of another of Sapphires Weimaraner daughters, this time she has one of her claws painted with pink nail varnish.

Its the final but definitely not the least, Weimaraner puppy introduction today and its the turn of another of Saphy's daughters this time she has her claw painted with red nail varnish, Saphy herself decided to make an appearance in this photo.

Nearly all the puppies eyes are open now and their starting to explore a little more, it won’t be long and they’ll be trying to escape the whelping box.

Its amazing how quickly the Weimaraner puppies grow, the photo's opposite were taken 10 days apart in that time the puppies have nearly doubled in size.

Poor Saphy, the pups are milk monsters at this age, constantly suckling.

A few of Saphy's Weimaraner puppies are starting to walk, I took this photo yesterday, it shows Saphy's daughter (black nail varnish) walking around the whelping box.

The puppies claws grow very quickly and as a result Sapphire gets scratched when the pups are suckling her, so its important to keep their claws trimmed.

When Saphy's not in the whelping box, the puppies all huddle up together to keep warm.

The puppies are more active now and like to play, their a pleasure to watch.

Sapphire enjoying a little rest bite from the pups, a quick walk with her Mum, Sister & Niece.

A rare moment where all the pups are resting.

Saphy enjoying being with her litter of Weimaraner puppies.

A happy Weimaraner puppy, settling down after a play.

In the next few days the puppies will move in to their larger accommodation, hopefully before they manage to escape the whelping box, the Weimaraner puppy in the photo is having a good go at getting out.

Four of Sapphires pups posing for a photo.

One of Saphy's puppies snuggling up.

A typical Weimaraner pose, laying flat on her back paws bent looking innocent.

Two of Sapphires Weimaraner puppies playing, their really coming out of their shells now.

As the puppies get bigger we supplement the milk they get off Sapphire, this is their first taste of the replacement milk and the dishes are licked clean.

Saphy helping her pups finish of their milk.

Since the puppies have been receiving supplementary milk, their weights are increasing much faster.

Its claw clipping time again, the puppies aren't too happy.

All of Saphy's Weimaraner puppies enjoy a hug.

Now the Sapphires Weimaraner puppies are bigger we have put new collars on them that correspond with their nail varnish colour.

We have now put collars on Sapphires puppies that correspond with their nail varnish colour and will try over the next six days to upload a fact file on each of the pups.

Second of the Fact Files and todays turn is Saphys daughter with Brown Nail varnish and a Pink with Brown Dots collar.

The next Fact File is for the puppy with the Pink Nail varnish and a Pink with White Dots collar, she's cheeky but no push over.

Its the turn of Sapphires son's Fact File today, a proper lad, plays hard but needs his sleep.

The Fact File today is of Red collar, very persistant when it comes to chasing her mum for a sneaky drink of milk.

Last but not least is the Fact File for Sapphires daughter with the Black collar, quite bossy but very loving.

Now the weather has improved (slightly), we take Sapphires Weimaraner puppies to play on the lawn, they love the grass.

Two of Sapphires Weimaraner puppies playing on the lawn, just waiting for the weather to improve so we can get them out again.

Finally the weathers improved and the Weimaraner pups can play out on the lawn, Brown collars making the most of it and stretching out while sunbathing.

We constantly have to increase the puppies feed as they grow; it is unbelievable how quickly Sapphires Weimaraner puppies are changing.

Saphys pups have decided they like picking danelions, when they play on the grass theres always one running around with a dandelion in their mouth.

The puppies are very inquisitive at this age and what better than playing with a pair of shoe laces.

When the sunshines the pups play.

As soon as the Weimaraner puppies touch the grass, its full steam a head running everywhere.

Saphy's son Ludo not too happy, he wants to play.

When the Weimaraner puppies are playing, they are constantly learning from each other, you quite often see their natural instinct to hunt, albeit playfully.

The puppies are a very even litter and play well together with no obvious litter leader as yet.

As the pups are growing their play becomes rougher, but they all seem to lookout for each over, if one pup gets too rough its not long before the others put him/her in their place.

An up todate photo (yesterday) of Enjager Maisy.

Introducing the latest addition to our family, Enjager Emerald Sunset or Emmy.

The first two pups went to their new homes today, I will upload photos in the next few days.

Playing with her mother is Enjager Summer, she was orange nail varnish and orange bones on her collar.

Its Enjager Brianna Belle's turn today, she was brown nail varnish and brown dots on her collar.

Sapphire & Heros Weimaraner puppies started going to their new homes on Saturday, first to go was Enjager Blu Equinox, thanks to Keiley & Simon for letting us know she arrived at her new home without incident and for the photos of her settling with her new older sister Asher (also a Weimaraner).

Enjager Maisy's new home is in Scotland, many thanks to Rosie for the photos of her settling in.

The leaving photo today is of Sapphires Son Ludo, he's gone to live at Calderbridge near Seascale, thanks to Mandy for keeping us up to date and sending photos.

Enjager Summer has gone to live in Hull, thanks to John & Christine for the video of Summer playing, I will try to upload it to the website next week.

Enjager Brianna Belle starts her new life in Llanrhaeadr North Wales with Shaun, Eirian and their son Tirion, thanks for letting us know that Brianna travelled well and we look forward to seeing photos of her as she grows.

No update or photo today.

Enjager Emerald Sunset is our latest addition, here she is with her mother Enjager Sapphire.

The video is of Emmy and her family Grandma Fern (short tail) aunty Bracken, cousin Ruby and Saphy her mum.

The chase is on Saphy's Weimaraner puppies are after her.

Thanks to John & Christine for the video opposite of Enjager Summer playing in her new garden.

Thanks to Mandy for the second video opposite of Enjager Sapphires Son Ludo playing with his new toy.

Todays update is of Enjager Maisy enjoying life on her sofa with toys.

Emmy helps herself to my welly.