On 15th & 17th September 2016 we took Bracken's daughter Enjager Ruby (her father is Gunalt Fansome of Allenie, he is the son by artificial insemination of the late great Flimmoric Fanclub a famous American bred Weimaraner from the eighties) for her first meeting with Gunalt Overhear (Hero).

This is Enjager Ruby's first mating, she is an extremely beautiful Weimaraner with a temperament to match.

On the way to see Hero theres time to stop off for a treat Ruby loves a Fellsman pie.

On the first trip down to meet Hero we combined the trip with buying some cattle for the farm, Ruby loves a ride out in the farm wagon.

Please see opposite Rub's pregnancy scan video, unfortunately the scan doesn’t tell us how many puppies Ruby has but it confirms she is pregnant at an early stage.

Ruby and her family enjoying a walk and exploring a mound of soil.

Ruby playing king of the castle and posing on top of the soil mound.

Out for a walk with the Sweeney Family, Ruby enjoying heself and showing off.

Enjager Ruby taking in the view and showing off her puppy tummy, not long now.

Ruby posing for a portrait photo. 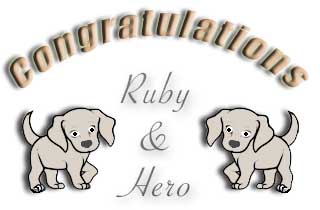 17th November 2016 we are pleased to announce that Enjager Ruby has given birth to 6 beautifull Weimaraner pups, mother and pups are all well, photos to follow.

Ruby preparing to whelp, in her new whelping box and bed.

Ruby relaxing just before she went in to labour.

Ruby is incredibly proud of her Weimaraner puppies, she's a fantastic mum.

How big at two days old (Photo was taken yesterday).

Its a hard life, Rubys Weimaraner pups fast a sleep after feeding.

Rubys Weimaraner pups are 5 days old today and so our vet comes and checks the young puppies and removes their dew claws, this is Ruby chilling with her litter after the vet has gone.

Ruby trying to find a comfortable position, while feeding her pups, see the magnified inset.

Look how they grow, their not small long.

Everytime we see Ruby's Weimaraner pups theres a photo opportunity, you could sit and watch them all day.

A close up photo of one of Ruby's girl puppies sleeping, their eyes will start to open in the next couple of days and then they'll start walking instead of crawling.

One of Ruby's boy Weimaraner puppies suckling, he means business.

Ruby's Weimaraner pups eyes started opening on Sunday, it won't be long and they will be walking

A Weimaraners watchful eye, Ruby checking her pups are ok.

Ruby, a proud Weimaraner mum, looking over her litter.

I was going to upload a photo of Ruby's Weimaraner pups getting their 2 week worming, but once I took this photo I couldn't resist uploading it, Ruby's Purple Collar Daughter upside down in the litter, it doesn't look comfortable.

A photo from a couple of days ago, one of Ruby's Weimaraner puppies, not enjoying his two week worming.

Ruby settled down and appreciating her Weimaraner pups.

We had escaping Weimaraner puppies everywhere the other day, hence we've had to extend the height of the whelping box sides, the puppies still need to be kept close to mum at this age.

Ruby watching over her playing puppies.

As Ruby's Weimaraner pups grow, they learn an incredible amount from interacting with each other and as you can see in the photo the playing gets rougher.

Ruby's pups get a quick inspection from Nana Bracken.

Ruby enjoying a bit of me time, with our other Weimaraners, they all ended up covered in mud.

A close up of one of Ruby's Weimaraner Pups.

One of Ruby's Weimaraner puppies yawning, its a hard life.

The Weimaraner Pups are now starting to peer over the whelping box sides, it won't be long before we have to move them to the puppy creche.

Two of Ruby's Weimaraner pups playing with some toys.

It looks really uncomfortable, but as the pups get older Ruby will often let them suckle while she's standing.

The Weimaraner pups moved in to their new accomodation today, the spacious puppy creche.

We also started supplementary feeding Ruby's Weimaraner litter, to take some of the ever increasing demand for milk off Ruby, her puppies must have thought its self service.

The Weimaraner puppies relaxing after exploring their new home.

We applied to the Kennel Club for Ruby's Weimaraner Puppies Pedigree Certificates today, all their names are opposite.

We make new wooden toys for each litter, Ruby's puppies got theirs on Christmas Day, I've take video of them playing and hope to upload it tomorrow.

The video opposite was taken on Christmas Day, Ruby's Weimaraner pups wore their selves out playing with their toys.

Weimaraner puppy stretching out, after a snooze.

Another snoozy day in the Enjager Weimaraner puppy creche.

Ruby's puppies have worked out where we keep their feed.

What fun a box can be.

Many thanks to Faye for this great drawing of Enjager Ruby and her daughter Enjager Wish Upon A Star or Luna.

On Saturday the first of Rubys litter started going to their new homes, the photo opposite shows Enjager Wish Upon A Star and her new family.

Also on Saturday, Enjager Spirit Of Freedom, went with her new family.

Sunday afternoon, Enjager Duchess Of Greenside, was picked up by her new family.