On the 27th February and 1st March 2017 we took Enjager Emerald Sunset or as we call her Emmy to meet Gunalt Invincible, otherwise known as Monty, this will be Emmy's first litter of pups and the first time we have used Monty (please see the photo montage of Monty opposite). Emmy's mother is Enjager Sapphire and her father is Gunalt Overhear, otherwise known as HERO.

If we were to sum up Emmy's personality with one photo, it would be the photo directly above in the header photomotage, where Emmy is enjoying her first Hunts Mans Pie, needles to say even the crumbs were hoovered up.

The second photo shows Emmy sitting patiently the third photos shows you why, there's a hunts mans pie up for grabs.

A photo of Enjager Emerald Sunset as a puppy, with her mother Enjager Sapphire watching over her.

Emerald sunbathing, while sitting on her mum, it never ceases to amaze us how much patience Weimaraners have with their offspring.

Emerald out for a stroll in Coniston, on a hot summers day. 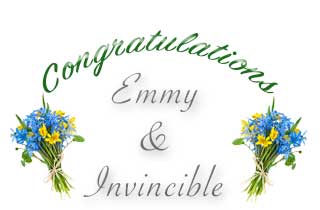 
Enjager Emerald Sunset gave birth to 5 beautiful Weimaraner puppies on 30th April 2017, mother and puppies are all well, they've all suckled and are been mothered brilliantly by Emmy.


A brilliant mother, Emmy fusses and licks all her puppies until their dry.


After hours of whelping, Emmy is worn out, but she has made sure all her pups are licked dry and suckling.


Meet the gang, Emmy's Weimaraner Puppies, complete with stripes (they fade over a couple of days).


Its important that Emmy eats as soon as she settles down, whelping is very demanding on her and she needs to produce milk to feed her litter.


The next day Emmy can settle down and enjoy her new born Weimaraner pups.


Weimaraner puppies all crashed out, all other the place.


Emmy's puppies are growing incredibly fast, their not small for long.


What a funny face, one of Emmy's pups close up.


Its not easy changing the puppy bed, these little fellas can fairly move, ones done a runner already.


Its funny to watch Emmy's Weimaraner puppies, they really do get in some awkward positions.


A puppy resting after a good play.


Two of Emmys Puppies having a quick drink.


All Emmy's Weimaraner puppies laying together.


One of Emmys pups flat out after a good feed.


The Weimaraner pups are changing fast.


The puppies don't like being wormed and you can get covered in wormer if you're not carefull.


One of Emmy's pups pawing one of his siblings.


How the Weimaraner pups grow, their not small for long.


One of Emmys puppies cuddling up to mum.


Emmys puppy laying on its back, what an awkward position.


Emmy keeping an eye on her pups playing.


Everyone in line, the pups all lined up ready for mischief.


Emmy is very tolerant with her young Weimaraner Puppies, its not easy she does everything for them without hesitation.


The puppies having a mid day snooze.


The Weimaraner puppies all cuddled up lovely and warm.


Mum checks her pups are clean and fed.


One of Emmy's young pups sitting pretty and posing for a photo.


First of the puppy profiles is Emmy's son with the blue collar.

Next is one of Emmy's sons with white stars on his collar.

The first of Emmy's daughters, she has a a red collar.

The last but not least of Emmy's sons, he's got green bones on his collar.

And finally Emmys second daughter, she's got a pink collar.

Making the most of the sun, its the first time out playing on the lawn for Emmys Weimaraner puppies.

Nearly took a photo, with all 5 of the rebels, they don't stand still long enough.

Two of Emmys pups staring at something.

Done it, managed to get all 5 Weimaraner pups and Emmy in one photo.

Emmy keeping a watchfull eye over her Weimaraner pups as they play.

One of Emeralds Weimaraner Puppies looking up at her.

The first of Emeralds litter goes to their new home, Enjager Zeus with his new family , he's a Manx Weimaraner now, living on the Isle Of Man.

Enjager Thodore James and his new family, he's going to be a Scottish Weimaraner living in Ayrshire.

Enjager Lola with her new family, she's going to be a Newcastle lass.

Enjager Moonlight Stone or Moo, she's already at home, we are keeping her to be part of the Enjager pack.

Enjager Zeus at his new home, with his new best friends.

Enjager Little Entertainer (Storm), his first night at his new home, with his new toy pig.

Enjager Theodore James (TJ), with Ian, looks like the training is going well.

Enjager Moonlight Stone (our Moo), with her mum Emerald.

Enjager Lola at her new home.

Lola checking out and playing with her new toys, look at the size of those paws.

Enjager Little Entertainer or Storm, its hungry work all this playing.