We took Enjager Sapphire or as we call her Saphy to meet Gunalt Overhear, or as he is affectionately known HERO, this is the third mating between Sapphire & Hero, their first meeting resulted in Enjager Emerald Sunset, who can be seen sitting in the pink dog bed with her mother in the photomontage at the top of the page.

When Sapphire went for her one month pregnancy scan, the vets couldn't see any pups and so it was concluded that she wasn't pregnant. We came to the conclusion that we had mis-timed her meeting with Hero and she hadn't been ovulating at the time, even though all the correct signs had indicated that she was ready.

Forward 7 weeks from her meeting with Hero and Saphy was showing the signs of been pregnant and so we took her for a second scan and guess what, she was pregnant after all with one big pup.

Because the initial scan indicated she wasn't pregnant we deleted the video and so unfortunately we don't have a pregnancy scan video, but we do have some amazing photos of a special young Weimaraner Puppy called Enjager Miracle of Solo. 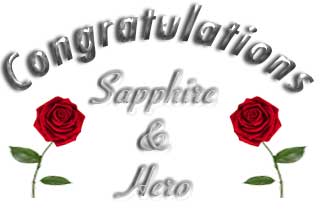 We are proud to announce that Enjager Sapphire has given birth to a healthy male pup on 22nd january 2017, please see photos opposite.

We were concerned that her Weimaraner puppy might have grown too large for her to give birth to naturally, but thankfully everything went ok and Miracle was born normally.

Mother & Son quickly bonded and Miracle suckled straight away, without any concerns.

You can see in the photo Miracles eyes are just starting to open.

After about 10 days we started supplementary feeding Miracle, the photo opposite shows the tiny feeding bottle we used.

He was a pleasure to feed and suckled well.

Sapphire was always at hand, making sure Miracle was cleaned and groomed after each feed.

Sapphires mothering instinct was second to none, as shown in the photo opposite where she's hugging her offspring.

The bond between Sapphire and her singleWeimaraner puppy, was quite amazing.

From an early age we introduced him to his extended family, to ensure he grew to be a well balanced Weimaraner puppy.

Although he is in his whelping box, he can nearl always see his Grandmother, Mother, Cousins and his playmate Amber (Second Cousin).

Waiting for his dinner, sitting with his mum.

Taking a look at whats going on outside the whelping box.

A quick stretch and play with mum.

A quick peck on the cheek for Sapphire.

A playfull pose with his mum, at this point he was continually escaping from the whelping box and causing chaos.

Mother and son Weimaraners posing for a photo.

He has worn his mum out, time for Sapphire to catch 40 winks.

A quiet moment with one of his toys.

Taking a peak at the outside world, you can't keep a good Weimaraner down.

Cleaning up his food bowl, if the amount he eats is anything to go off he's going to be a big Weimaraner.

Time for a snuggle with mam.

Not a puppy anymore, he's a young Weimaraner now.

He has grown so much he can nearly step in and out of the whelping box as he likes.

Look at the size of those Weimaraner paws, he's a big lad.

Brilliant pose for the camera, what a beautiful young Weimaraner puppy he is.

Playing with his second cousin Amber, the rougher the better.

Enjager Miracle of Solo with his new family under the watchful eye of Sapphire.