In August 2017 our much loved Weimaraner Enjager Bracken (her father is Gunalt Experience) went for her first meeting with Gunalt De Ice at Strideview.

De Ice, is currently the most successful Weimaraner in the country having won Best in Breed at Crufts & Weimaraner Society Dog of the Year on multiple occasions.

Opposite are some photos of Bracken and Ice when they met, Karen, De Ice's owners tells us that she calls the resulting pups "Ice Pops" after their father.

Bracken sitting patiently waiting for her pie, she wasn’t too happy, the shop had sold out of huntsman’s pies, her favourite.

One of the rare occassions where Bracken poses for a photo.

The video opposite show's Bracken at her 1 month scan, we are pleased to announce that she is pregnant. If you look closely at the video you can see the outline of some of her puppies, we don't know the size of her litter but there seems to be quite a bit of activity in her tummy. 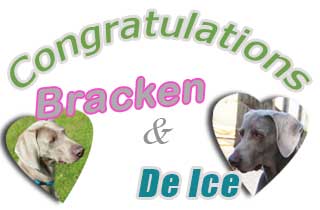 Bracken is an excellent mum, it isn't long before both pups are licked clean and dry.

Because of Brackens brilliant mothering and the puppies natural survival instincts, they are suckling within minutes of birth.

Next after the pups have filled their tummies with their mums colostrum, its time for a snuggle up to mum and a long snooze.

Its not long before the puppies have mastered suckling and can contort themselves in to all sorts of peculiar positions for their feed.

A close up of one of Brackens daughters

After a couple of days the Weimaraner pups start showing the first signs of their individual characters.

Its been an exhausting couple of days for Bracken, she needs to relax as well.

Theres no rest for Bracken, these pups want their milk

After a full tummy theres only one thing for it a snooze.

One of the weimaraner puppies has decided its comfortable to sleep with her head resting on the whelping box.

Brackens Weimaraner Puppies are weighed daily, to ensure their weight gain is correct.

Her pups are incredibly cute and pull some funny faces.

How can you be tired, Brackens Weimaraner pup yawning.

One of Brackens Weimaraner girls having happy dreams.

A close up of a sleeping pup, butter wouldn't melt.

Sisterly love, the two sisters interact both with each other and their mother.

As the puppies grow their play becomes more energetic and funny to whatch.

But after a good play what better than a cuddleup and snooze.

Ready to pounce, one of the girls before a good play with her sister.

This little puppy wasn't going to take the wormer easily, we ended up covered.

The calm after the storm, finally Bracken's pups are asleep.

Scratch that itch, one of the weimaraner puppy having difficulty reaching an awkward itch.

A photo of Bracken's Girls together.

Great photo of Mother and her two daughters.

Both Brackens Weimaraner girls have new collars, Red and Pink.

One of Bracken's pups enjoying the view from the top, as she lays on her mum.

The Weimaraner puppies are in the puppy crech now, but mum Bracken still keeps a watchfull eye over them.

Their not small puppies long, their soon looking like young Weimaraners.

Bracken's pups have a lot more space to play in the puppy creche and Bracken can go in and out as she pleases.

Bracken's daughters have new toys to explore and enjoy learning while playing.

We make new toys for each litter and they are incredibly important, the puppies learn through play, different movements shapes and noises.

One of Brackens Weimaraner puppies playing with their new toys.

All worn out, one of the girls resting.

Family, one of the pups with her Mum, Older Sister & Gran..

Once the Weimaraner pups are old enough and mum is happy, we introduce them under supervision to their extended family, which helps them socialise as they get older.

Photo of one of the girls showing her big Weimaraner puppy paws.

Both Weimaraner girls playing with mum.

One of Brackens bonny lasses possing for a photo.

Both the Weimaraner pups are little monkeys, if you leave something out its claimed as a toy.

Bracken still jumps in to the puppy creche to see her daughters, but as they get older and rougher she visits less, its a natural progression as the pups develop in to young Weimaraner dogs.

Bracken still jumps in to the puppy creche to feed her young Weimaraner pups, but we also feed them, so theres less demand on Bracken.

Bracken watching over her Weimaraner Pups as they play.

One of the little pups look at their reflection.

An inquisitive Weimaraner pup checking out her surroundings.

A basful Weimaraner pup, don't believe a word of it.

Brackens 2 Weimaraner daughters are a bit of a handful now, untill you pick them up and then butter wouldn't melt.

Enjager Luna Moon meets her new family from the Isle of Man.

We are keeping Enjager Ice Diamond Baby, she's the next line of the Enjager breed.

Luna at her new home, with her favourite toy.

Enjager Ice bemused by a lamd, it doesn't look like a Weimaraner, what is it.

Enjager ILuna enjoying a snooze, its hard work been a young Weimaraner.

Bracken and Ice mother and daughter.

Enjager Luna out for a car ride.